Asbel Kiprop has won four major titles at 1500m but his victory in Beijing two years ago was arguably the most impressive of the lot as he had to extricate himself from a seemingly impossible position on the last lap and overtake nine runners in the last 300 metres to ensure his third world title.

A fourth world title in London would match the haul achieved by world record-holder Hicham El Guerrouj from Morocco between 1997 and 2003. But while El Guerrouj could often rely on a teammate to ensure a fast pace to his liking, Kiprop has three younger teammates – not to mention some very capable challengers from the rest of the world – all looking to knock the reigning champion off his pedestal.

Kiprop has been in indifferent form in the lead-up to the championships. Most recently, he was a well-beaten 11th at the IAAF Diamond League meeting in Monaco in 3:34.91, but experience and a cool head – which Kiprop demonstrated after getting boxed on the last lap in Beijing – are what is important in a championship setting.

A month ago, Ronald Kwemoi would have probably been the consensus pick to claim this title. He won the 1500m at the Kenyan Trials at altitude in 3:30.89 but this was followed by a defeat over 3000m at the IAAF Diamond League meeting in Paris before finishing third in Monaco where he appeared to limp away from the track.

Elijah Manangoi and Timothy Cheruiyot finished first and second respectively in that race in the two fastest times of the year. They were also second and seventh respectively in Beijing and are both expected to feature in the race for the medals again. Manangoi was one of the favourites for the Olympic title last year but a calf injury forced him to withdraw from the semifinal while Cheruiyot has improved substantially since making the final two years ago when he was still a teenager.

Matthew Centrowitz ran a masterfully controlled race to claim the Olympic title last summer and the 27-year-old has never finished lower than eighth in the seven major 1500m finals he has contested indoors and outdoors. Centrowitz’s season hasn’t gone entirely to plan – and he was even on the cusp of withdrawing from the US Championships after sustaining a mid-season adductor injury – but he is returning to form again after finishing second to Robby Andrews in their domestic championships.

The likes of Bahrain’s Sadik Mikhou (3:31.34) and Ethiopia’s Aman Wote (3:31.63) both feature prominently on the world list but neither of them have much in the way of championship form. By contrast, Nick Willis from New Zealand and Abdalaati Iguider from Morocco are midpack on the season’s lists with 3:34.74 and 3:34.99 respectively but they are perhaps the two most experienced athletes on the entry list and are both dependable big-time performers.

European champion Filip Ingebrigtsen from Norway could be a threat in a slow race while 800m specialist Marcin Lewandowski will contest the 1500m for the first time in a global championships. Lewandowski claimed the European indoor title at this distance in Belgrade in March and set a Polish record of 3:34.04 in Monaco last month.

Other long shots include Brits Chris O’Hare and Jake Wightman, who have both taken wins on the IAAF Diamond League circuit this summer, while Spain’s Adel Mechaal has been in good form this season over 1500m and 3000m. staff - February 6, 2020
0
Deborah Acquah has confirmed her fine early season form in the long jump with a 6.58m performance at the 2020 Texas Tech Invitational. Competing... 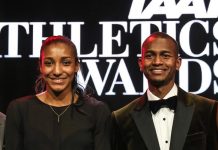