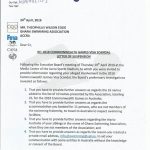 Over a month after the biggest and disgraceful visa scandal that rocked Ghana’s participation at the Commonwealth Games (CWG) Gold Coast 2018, the Ghana Olympic Committee is still in a state of denial about the key role it played in the unfolding saga.

Despite compelling evidence indicting some top officials and individuals, a statement released in the aftermath of a GOC Executive Board meeting held on Monday, 23rd April 2018 showed very little action on the part of the Olympic governing body.
…….“fully endorses all current investigations at various levels and has initiated its own internal disciplinary procedures and self-righting processes to ensure a complete clean up at all levels,” the signed GOC statement with no under listed name which was released to the media on Friday, 27th April said.

Interestingly, a day after the GOC Board meeting on 23rd April, the Ghana Swimming Association (GSA) executive board, which had met earlier on 19th April, in an unprecedented move announced the suspension of its President Theophilus Wilson Edzie for adding 16 names to its list for the CWG, among other acts. Below are the details in the letter signed by the GSA General Secretary Mohammed Muniru Kassim. 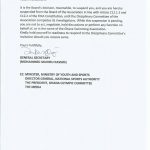 The statement continued that the case has been referred to the GSA disciplinary committee.
These are indeed serious allegations bordering on fraud, conflict of interest, misrepresentation, and outright forgery.

Inside sources at the GSA say, when presented with the evidence of his actions including the GSA’s long list as captured by the GOC, email trails, photos, travel itinerary of the people involved, Theophilus Edzie had very little to say. 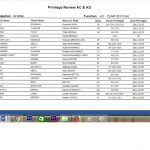 But the GSA scandal takes on a different twist altogether when you consider the fact that the GSA President Theophilus Edzie might not have acted alone in this scam as he is also the Deputy Treasurer of the GOC.
It is important to understand how one person could have added 16 additional names to the long list without raising eye brows at the GOC-who also had the original lists of all the federations involved!! 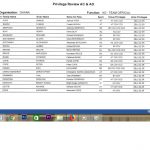 There appears to have been a deliberate policy of adding additional names to the original lists supplied by the federations by the 28th November, 2017 long-list deadline. Now, the problem was finding enough spaces to put those additional names.
Hussein Addy & Christine Ashley: the ‘special’ data entry officers
It is important to point out that the GOC broke protocol when it appointed the General Secretary of the Ghana Weightlifting Association Hussein Addy as its data entry officer for the CWG 2018 when it already had a Project Officer by name Evelyn Akaba on its books.

It will be recalled that the GOC terminated the appointment of another Project Officer Erasmus Kwaw last year-a case that is currently pending before the law courts.

Interestingly, Evelyn was registered as an ‘Administrative Personnel’ on the CWG long list but she was not assigned her normal role as a data entry officer as she had done for the GOC prior to the Rio 2016 Olympic Games.

It seems the GOC needed “special” operatives for the job this time. They employed two of their trusted hands in Christine Ashley, a “special assistant and secretary” to GOC President Ben Nunoo Mensah and Hussein Addy, the General Secretary of Ben Nunoo Mensah’s Ghana Weightlifting Association. Christine Ashley is also the General Secretary of the Ghana Volleyball Association whose President is also the First Vice President of the GOC, Paul Atchoe.

The GOC entrusted the role of data entry to Hussein Addy who played a very key role in this scandal as he was the primary data collection officer this time. He was assisted by Christine Ashley.

One might ask why the over reliance on non GOC staff members? Well, a similar act took place prior to the Glasgow 2014 Commonwealth Games when Mr. Ben Nunoo Mensah was Ghana’s Chef de Mission.

Sources say, he virtually took the Games secretariat to his then office at the Accra Sports stadium. Then again, he appointed many people to various positions without the approval of the GOC Executive Board.

Many of those appointments were revoked and replaced with workers and officers of the GOC when Mr. Mensah eventually resigned from his position as leader of delegation citing personal reasons.

Ghana’s list for Glasgow 2014 needed to be “cleaned up” following Mr. Mensah’s departure. One wonders what would have happened if the list had not been reviewed.

Fast forward to 2018: having received several requests from both internal and external interests, the GOC acting through Hussein Addy proceeded to add some of those names to the legitimate lists provided by the federations on the long list.

The swimming list is only one of the many over bloated federations’ lists which was created by the GOC and subsequently sent to the local organising committee of Gold Coast 2018.

The walls are closing in on the key actors in what arguably is the biggest and shameful visa scandal ever witnessed in Ghana.

The GOC can claim ignorance or play the blame game all it wants, but it remains to be seen if the President of the Ghana Swimming Association Theophilus Wilson Edzie will go down alone!!

This is the first part of our series on the Australian Visa Scandal. 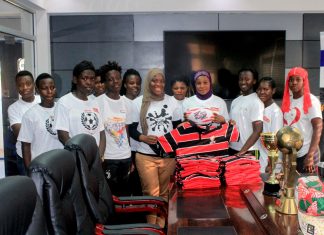 Erasmus Kwaw - April 29, 2019
0
As part of her efforts to support Ghana rugby at the grassroots level, a U.K. based rugby player Zainab Alema has donated rugby equipment... 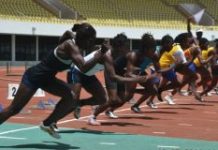 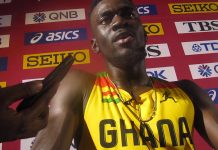 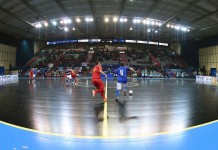