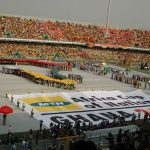 Ghana plans to host the 2038 Fifa World Cup as part of its 40-year development plan, developed by the National Development Planning Commission (NDPC) and presented to President Akufo Addo.

This was revealed by a member of the NDPC team that worked on the document, Mr. Nii Moi Thompson on Metro TV’s Good Evening Ghana program on Tuesday evening.

According to Mr. Thompson, as part of the long term development plan, Ghana plans to host international events like the World Cup and Olympic Games.

A yet to be constructed iconic stadium, “Black Star Stadium”, will be constructed with the ‘best 21st Century technology while the roof would be made up of solar panels.’ The stadium will be linked by road and rail.

Nii Moi Thompson acknowledged that the nation will require heavy capital and other human resources to be able to bid and host the World Cup.

He was adamant that the country can tap into capital from other markets to make the dream of hosting the World Cup come true.

Ghana has not hosted a Fifa World tournament or the Olympic Games in its history. The nation last hosted the African Cup of Nations in 2008 and recently hosted the 16-nation strong West African Football Union Cup (WAFU Cup). Ghana is set to host the African Women’s Nations Cup next year.

South Africa is on record as the only African nation to have ever hosted the World Cup, which it did in 2010 amidst pressure from the West.

Meanwhile, the NDPC’s plans are subject to the approval of the current government and its eventual implementation. It remains to be seen if the plans will be fully implemented.

Usain Bolt: My start is killing me

Photos: AIMS Ghana holds first ever academia and industry forum 2022 as part of...

Athletics Erasmus Kwaw - August 3, 2017
0
Load more
Liquid Sports Ghana is a Ghanaian based website involved in promoting and developing sports in the country. The company has been involved actively in research and formalizing procedures for the eventual take off of an ambitious project to develop sports.
Contact us: [email protected]