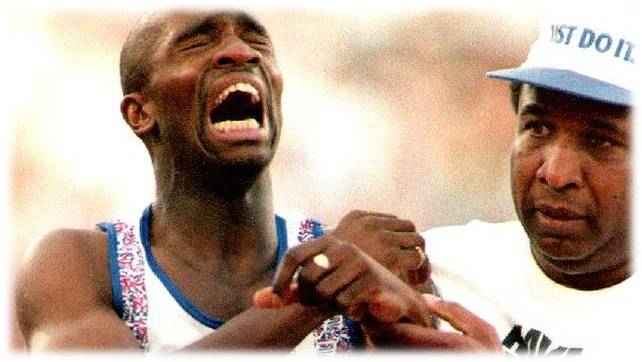 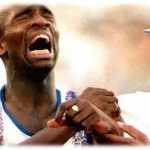 Derek Anthony Redmond didn’t win a medal at the Barcelona Olympics. In fact, the British 400m runner didn’t even make it past the semi-final stage. But it was his determination to finish that will live forever in the minds of millions. Injury forced the Briton to withdraw from the 1988 Seoul Games just ten minutes before the start of his 400m heat, so Redmond felt he had everything to prove in Barcelona four years later. Not to his peers, that is but, as he later admitted, to himself.

Redmond wanted a medal whatever the colour and he started well, qualifying for the semi-finals by clocking the fastest time in his heat. As the gun signaled the start of his semi-final, Redmond charged out of the blocks, making good speed over his first 250m. At that point his right hamstring snapped. The one time British 400m record holder pulled sharply up as the rest of his field ran away from him, leaving Redmond on his knees and crippled, his Olympic dream over.

What followed, however, is one of the most memorable moments in Olympic history. Redmond got back to his feet and tried to finish the race. In an act of true courage against adversity, Redmond could only hop on one leg towards the finish line. Pain etched on his face as each step became more painful than the last, Redmond would not give up. He had promised himself and his father, that he would finish the race ‘no matter what,’ and he would keep that promise.

Half way to the finish line on one leg and crying with desperation, Derek was joined by his father Jim. The moment Redmond crossed the finish line brought sixty-five thousand spectators to their feet in a standing ovation, many also in tears. Few can remember that Steve Lewis of the USA won the semi-final in a time of 44.50. But no one who saw it will ever forget Derek Redmond’s courage on the day he defined the essence of the human and Olympic spirit. 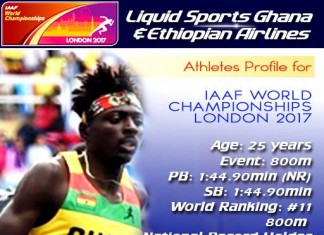 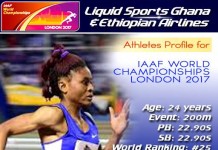 Liquid Special on Ghana’s Janet Amponsah ahead of her 200m event... 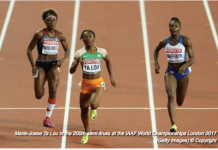