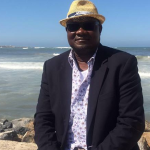 There is no end in sight at the never ending series of bad news on Ghana’s campaign at the ongoing Commonwealth Games at Gold Coast 2018.

First was the shocking visa scandal that has resulted in the deportation of about “60 people for trying to enter Australia by false pretense,” according to the Ghana Presidency.

Then followed the suspensions of the Deputy Minister of Youth and Sports and the Acting Director General of the National Sports Authority, and the recalls of the Ghana Olympic Committee President, Chef de Mission for the Games and the Board Chairman of the National Sports Authority to assist with investigations by the Criminal Investigative Department of the Ghana Police Service.

One more story caught our attention on Thursday, 12th April, 2018 when athletes attempted to boycott the Games owing to a disagreement on how much per diem allowances they were due.

Background
Before the team departed for the pre- games in Gold Coast 2018, the Deputy Minister of Youth and Sports Mr. Pius Hadzide told the athletes they will receive a per diem allowance of $500 for the 10-day pre games.
According to the ministry, athletes were also supposed to earn $100 per day when they arrive at the Games Village from 1st April to 16th April.

In total they were to receive $2,100. This figure is disputed by the athletes who feel they are due more in addition to the $500 they received for the pre games.

This is their reasoning: Team Ghana had arrived at the Games Village on 25th March 2018, meaning they spent seven more days at the Games village than earlier budgeted for.

Athletes and officials thought they were going to be paid per diem allowances for seven (7) more days because the Deputy Minister had prior to departure from Accra said they will be paid $100s per day when the team arrives at the Games village.

Matters came to a head a day after Ghana’s flamboyant show at the opening ceremony of Gold Coast 2018 which fell on 4th April.

On 5th April, athletes were shocked to the marrow when the Ministry of Youth and Sport’s accountant, one Mr. Sarpong, paid each athlete $1,200 being their per diem allowances for the Games. Coaches and other technical officials were paid $1,940 each.

Insiders say the act greatly angered the team members who felt they were being short changed by the leaders of the team. The athletes in particular were demoralised but no official explanation was forthcoming from either the Chef de Mission or the representatives of the government. If they gave any reasons, it wasn’t satisfactory to the athletes.

Interestingly on the same day, Ghana’s boxing medal hopeful Abdul Wahid Omar lost his bantamweight bout at preliminary round stage. It is a strongly held view that that singular act of paying $1200 to the athletes might have adversely affected performances in the early days of the Games. This view is not necessary backed by facts.
On Thursday, 12th April, athletes held a meeting and decided to boycott the Games until their allowances were paid. Leading the discussion is team captain and wheelchair athlete Raphael Botyso Nkegbe.

He is clearly heard in an audio widely circulated on social media leading the discussion and finally urging athletes who were due to compete the following day not to compete.

In the audio, Nkegbe is not the only one heard talking or disgruntled about the decision of the officials but others are heard supporting his view including some female athletes. Possibly the female weightlifters!

This is how Joy Fm captured the story: “The notice went out to all athletes on the common page of the Team Ghana WhatsApp platform. It served notice to all athletes to get ready for a boycott of the rest of the 2018 Commonwealth Games if outstanding bonuses were not paid with immediate effect.”

According to sources, the 11 are due $2,800 each for the duration of their stay at the Games.
It is also not too clear why they have not been paid even though the Ministry of Youth and Sports acknowledges the deficit.

Historical context
At the last Commonwealth Games held at Glasgow 2014, athletes received a total of $3,500 per diem allowances made up of about $1200 pre games and $2,300 for the Games phase.

The per diem structure and games bonuses were announced on the day the team departed from their pre games venue South Ayrshire to Glasgow.

The allowances were paid days into the Games when the then Minister of Youth and Sports and the National Sports Authority’s accountant arrived in Glasgow.

At the Rio 2016 Olympic Games, no pre games per diem allowances were paid as the team jetted into Rio right at the start of the Games.

At London 2012 Olympic Games, the team was paid its per diem allowances at their pre games base at Plymouth before subsequently being paid their Games allowances at London.

Key Question
The Ministry and Leaders of Team Ghana also have to explain why they initially reneged on their promise to pay the athletes the full per diem amount of $1600 at the Games. It will be recalled that the athletes were initially paid $1200 before the accountant added $400 more following the revolt.

Indeed, if they truly didn’t want the athletes to keep so much money on them, then they should have rather paid them $400 and held back $1,200. Surely, there must be a better explanation than the one given by the GOC Official.
There is a need to clarify the issues surrounding the payment of the per diem allowances as there is a strong suspicion that somebody was trying to short chance the athletes or worse: the Ministry’s accountant did not have enough money at Gold Coast. This issue needs proper investigations to establish the facts.

NOTE: I posed this question to an official of the Ministry of Youth and Sports and did not get a direct answer.
The MYS official however insisted they had paid the athletes ALL their per diem allowances.

Erasmus Kwaw - January 21, 2020
0
Officials and athletes have hailed the 26th Ghana University Sports Association Legon 2020 as one of the best organised ever in Ghana since its... 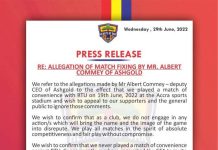 Handball Association of Ghana: When a ghost candidate, executive and delegate...